I ran into this post recently. It’s interesting how early that the dining and eating patterns in NYC were established.  Delmonico’s in the financial district is perhaps the most famous example.  It’s still there, but it may not be the same Delmonicos.

The article starts off with a directive from the editor-in-chief to “go and dine”:

“Very well,” replied the editor-in-chief. “Dine somewhere else to-day and somewhere else to-morrow. I wish you to dine everywhere, — from the Astor House Restaurant to the smallest description of dining saloon in the City, in order that you may furnish an account of all these places. The cashier will pay your expenses.”

Before starting on his quest, the reporter differentiates eating from dining — noting that many believe “whereas all people know how to eat, it is only the French who know how to dine” — and defines what he means by an American dinner (as opposed to a French one). Here’s his list of the types of American dinner to be found in New York, from most comfortable to least:

The remainder of the article is devoted to descriptions of what a diner might find at each of these types of establishments. Among the places he dined was Delmonico’s, where dining in America is said to have originated:

Once let Delmonico have your order, and you are safe. You may repose in peace up to the very moment when you sit down with your guests. No nobleman of England — no Marquis of the ancienne nobless — was ever better served or waited on in greater style that you will be in a private room at Delmonico’s. The lights will be brilliant, the waiters will be curled and perfumed and gloved, the dishes will be strictly en règle and the wines will come with precision of clock-work that has been duly wound up. If you “pay your money like a gentleman,” you will be fed like a gentleman, and no mistake… The cookery, however, will be superb, and the attendance will be good. If you make the ordinary mistakes of a untraveled man, and call for dishes in unusual progression, the waiter will perhaps sneer almost imperceptibly, but he will go no further, if you don’t try his feelings too harshly, or put your knife into your mouth.

According to a series of articles by Joe O’Connell, Delmonico’s was the first restaurant in the US when it opened in 1830 and invented Eggs Benedict, Oysters Rockefeller, Baked Alaska, Lobster Newberg, and the term “86’d”, used when the popular Delmonico Steak (#86 on menu) was sold out, or so the story goes. O’Connell’s history of Delmonico’s provides us with some context for the How We Dine piece:

The restaurant featured a bill of fare, which was itself new. Those who dined at inns were fed on a set meal for a set price. As a result, everyone was fed the same meal and were charged the same price, whether they ate little or much. In Paris, however, restaurants offered their patrons a “bill of fare”, a carte, which listed separate dishes with individual prices. Each patron could choose a combination of dishes which was different from the other patrons. Each dish was priced separately. Thus, the restaurant was able to accommodate the tastes and hunger of each individual. The various dishes and their prices were listed on a carte or (the English translation) “bill of fare”. Today, we call it a menu.

And from Delmonico’s developed many different types of dining establishments, which the Strong-Minded Reporter set out to document thirty years later. Contrast his visit to Delmonico’s with the experience in the “sandwich-room” at Browne’s Auction Hotel, an eating-house:

The habitués of the place are rarely questioned at all. The man who has eaten a sandwich every day for the past ten years at the Auction Hotel no sooner takes his seat than a sandwich is set before him. The man who has for the same period indulged daily in pie or hard boiled eggs (there are some men with amazing digestion) is similarly treated. The occasional visitor, however, is briefly questioned by the attendant before whom he takes his place. “Sandwich?” or “Pie?” If he say “Sandwich,” in reply, the little man laconically inquires, “Mustard?” The customer nods, and is served. If his mission be pie, instead, a little square morsel of cheese is invariably presented to him. Why such a custom should prevail at these places, no amount of research has yet enabled me to ascertain. Nothing can be more incongruous to pie than cheese, which, according to rule and common sense, is only admissible after pie, as a digester. But the guests at the Auction Hotel invariably take them together, and with strict fairness — a bite at the pie, and a bite at the cheese, again the pie, and again the cheese, and so on until both are finished.

The experience of being a regular has barely changed in 150 years. And finally, our intrepid reporter visits an unnamed third class eating-house:

The noise in the dining hall is terrific. A guest has no sooner seated himself than a plate is literally flung at him by an irritated and perspiring waiter, loosely habited in an unbuttoned shirt whereof the varying color is, I am given to understand, white on Sunday, and daily darkening until Saturday, when it is mixed white and black — black predominating. The jerking of the plate is closely followed up by a similar performance with a knife and a steel fork, and immediately succeeding these harmless missiles come a fearful shout from the waiter demanding in hasty tones, “What do you want now?” Having mildly stated what you desire to be served with, the waiter echoes your words in a voice of thunder, goes through the same ceremony with the next man and the next, through an infinite series, and rushes frantically from your presence. Presently returning, he appears with a column of dishes whereof the base is in one hand and the extreme edge of the capital is artfully secured under his chin. He passes down the aisle of guests, and, as he goes, deals out the dishes as he would cards, until the last is served, when he commences again Da Capo. The disgusting manner in which the individuals who dine at this place, thrust their food into their mouths with the blades of their knives, makes you tremble with apprehensions of suicide…

New York has always been a very busy city and the places where you eat lunch have always reflected that.  What’s interesting is that the street and fast food has only become more diverse as time goes forward. In the 19th Century it was oysters from Long Island Sound and roast beef. Which explains the famous Oyster Bar in GCT.

In the 20th and now, it’s pizza, Chinese and Falafels, along with Hamburgers and pastrami sandwiches. And even more wonderful food. One thing about NYC is that the eating is as diverse as the city and NYC may be the most diverse city on the planet.  Of course that diversity is threatened by the pressures of NYC’s city government.

What the current people in charge of NYC don’t seem to understand is that all the regulations they come up  with only make it harder for the very diversity that they want in the city to exist at all.  The larger the regulatory burden, the harder it is for the small businesses like restaurants to survive.  Which means that the quality of life in NYC will be diminished.  Here’s a Flikr album with  some of the numerous places to eat in the Big Apple. 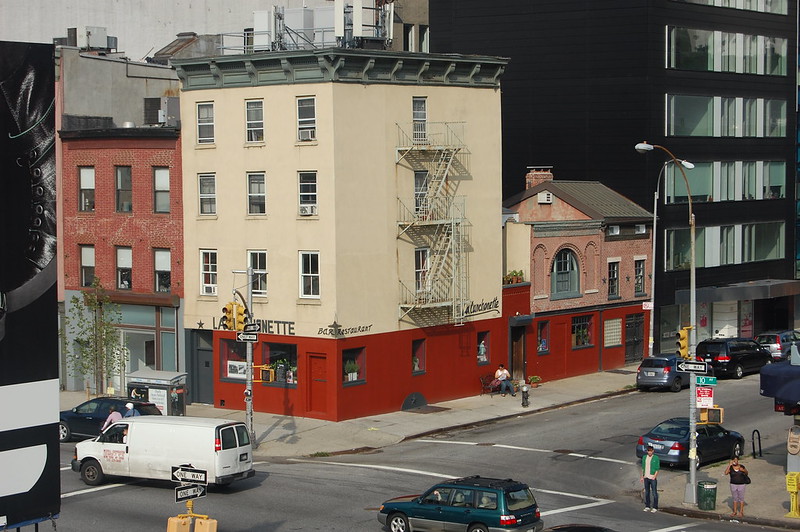