Recently I ran into this prediction of what an airliner of 1988 would look like in 1988. The thing is a reasonable extapolation of late 1930’s technology. Here it is. 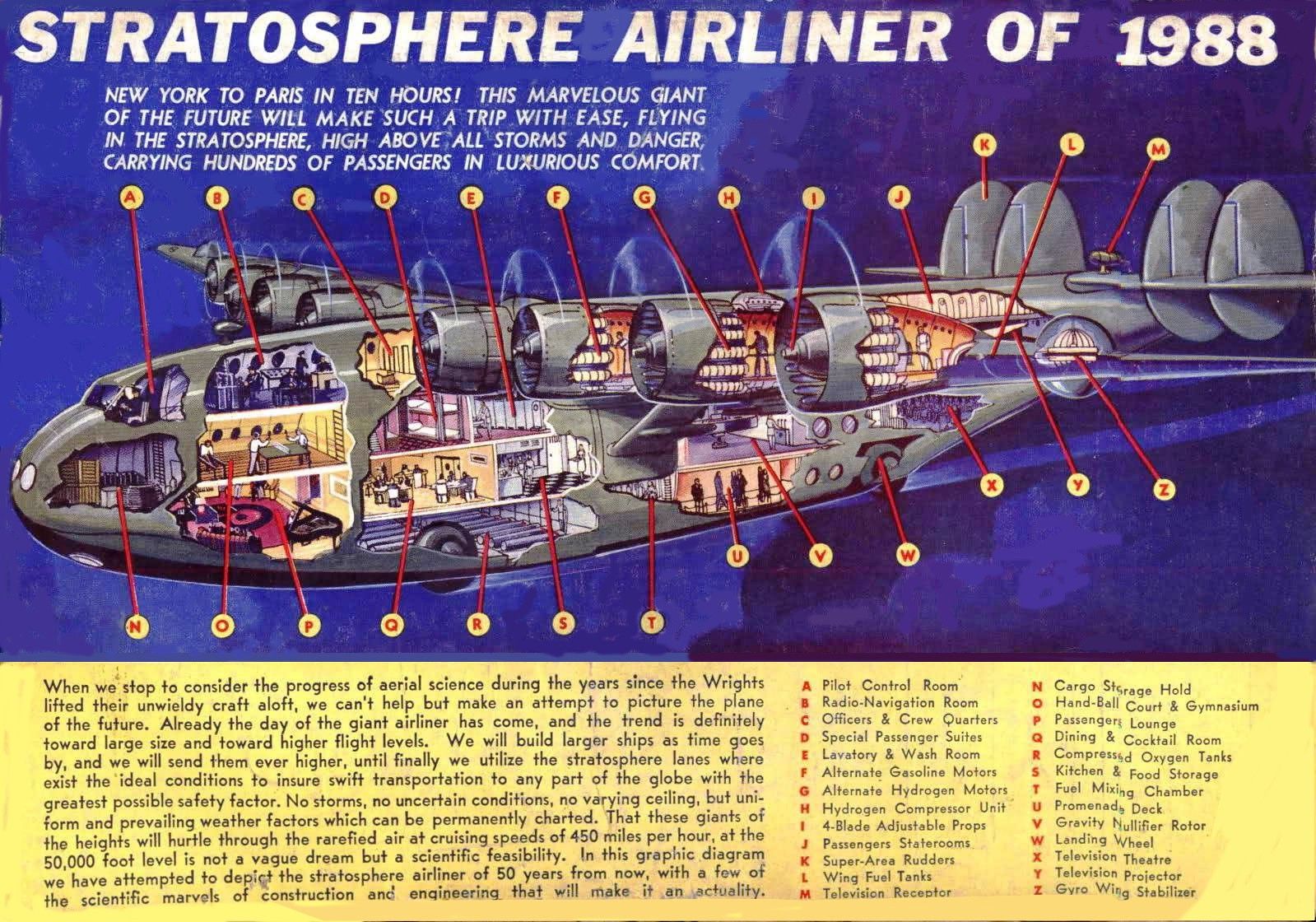 A huge flying boat with huge radial engines. Of course that was totally wrong.

END_OF_DOCUMENT_TOKEN_TO_BE_REPLACED

Popular Mechanics has an interesting series of article on flying.

END_OF_DOCUMENT_TOKEN_TO_BE_REPLACED

There are two big shows where the worldwide aerospace industry gets together to do business. This year it’s Farnborough.

Last year it was Paris. It will be Paris again next year.

These shows are where airplane geeks get to see all the latest things that fly and where engineers can get together and see the latest stuff.  The size of the combined deals every year rivals the GDP of a fairly large country.  So these shows are a big deal for the aircraft, parts and supplies manufacturers.  When I was in the industry I just missed the Shows by not being in the right  job at the time.

It’s also where there have been more than normal amount of very expensive accidents as the companies try to show what there stuff can REALLY do.

Pratt has finally completed it’s geared bypass engine for commercial aircraft. The development for this engine has been going on for a long time. There are reasons for that.  Some of it’s FAA red tape. The biggest part though, is the expected long life of the engines themselves.

It’s not like the old days where you did all your development in a backshop. Of course the aircraft aren’t enlarged kites anymore either.

END_OF_DOCUMENT_TOKEN_TO_BE_REPLACED

I first saw a reference to the B19 in a book I had as a child on air tactics and strategy. Back then I had not feel just how much larger it was than other aircraft of the time like the B17.

END_OF_DOCUMENT_TOKEN_TO_BE_REPLACED

How UPS gets your package through the system.

Building efficient  terminals is the key to getting logistics done.

A great ad from Singapore Airlines.

All of that is from the same cardstock that is use to make index folders.

Some more picture of aircraft from the 1920’s.  These are from Page’s “Modern Aircraft”

The 1920’s were a period of experimentation and development for the aircraft industry as the lessons of  WW1 were absorbed and young engineers worked to create aircraft that could serve a variety of functions.

First we start off with light than air craft, which were going from balloons to functional aircraft not too much different from the Goodyear blimp we love today.

The wings on aircraft got more structure internally as it was realized just how much drag the wires if a biplane created.

The old box like structure of WW1 was being supplanted by new all metal construction.

Better power plants would lead to larger and faster aircraft.

The instrument panel actually had instruments to tell the pilot information that could help him fly at night or bad weather.  Necessary for the operation of commercial and mail traffic.

The aircraft at the end of the 1920s was a different animal from the beginning with the pilot being enclosed inside the aircraft.

More streamlined and no wires.

With racing aircraft all these things led to some very extreme aircraft as manufacturers and countries vied to win trophies such as the Schneider Cup.

to end this up here’s a Ford Trimotor video.