Recently this item from Quora came up on my newsfeed on Facebook.

Science fiction author Tom Kratman commented that he was writing a book putting a German force in Kent, in late May 1940. he was rather heated in his arguments that this was “Not Sea Lion and could possibly win the Battle of Britain. I thought that he was kidding himself. I truly doubted that A. The Battle of Britain could have started on the German side any earlier than it did.

Here is the battlespace:

And B. that there was no way that the Luftwaffe could put enough airborne troops in Kent to do more than frighten some old ladies and get themselves arrested.

I am hardly the only one that does not think that something like this would end well.

We went back and forth while I brought up some rather large resources nearby Kent that he probably didn’t know about, but I did.

I also pointed out that this was likely to happen to the aircraft attacking the Chain Home stations.

And that this was more than likely to happen to the transports airdropping troops if there weren’t enough fighters.

Then I did some digging and found this from the man that the Col. was citing as a source.

Employment in Holland, The capture of “Fortress  Holland”*
( 10 – 15 May 1940),at the beginning of the western campaign, was the first large – scale test for the parachute and air landing forces; for the air transport units, whose assignments were substantially the same as in Norway , it was a repetition of a past performance , but on a much larger scale . The dropping of parachute troops was carried out by all groups of the lst Bombardment Wing for Special Employment on the morning of 10 May 1940, and was accomplished according to plan and without casualties . The 2nd Bombardment Wing for Special Employment, organized shortly before for the transport of air landing forces into Holland, did not fare so well, for the landing areas selected had been heavily mined and were exposed to constant enemy fire . Forced landings and unscheduled landings on highways or in open terrain resulted in heavy losses . Luckily this loss in aircraft could have no detrimental effect on subsequent operations, since the under taking as a whole did not develop into an airlift , as had been the case in Norway, but was limited to a few supply flights , carried out on 10 and 11 May 1940 by units of the l st Bombardment Wing for Special Employment . Advancing army units soon established contact ,  making it unnecessary to continue supplying the force e fighting there by air.

The sad fact is that the Colonel’s story is playing to the British strengths and the German’s weaknesses. The British had the best system for air defense in the world in mid 1940. The Chain home towers were only part of it.

The first question I had was how vulnerable were the Chain Home Stations. Not very.

The Chain home stations had a lot of overlap. 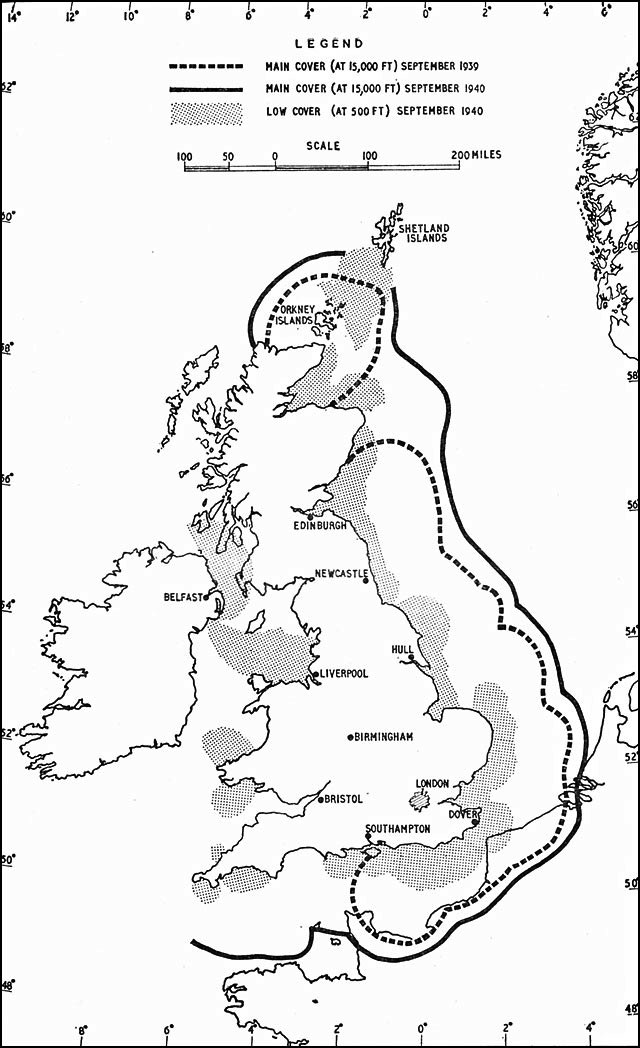 Also, the Chain home were not how Fighter Command actually directed fighters to intercepts. That was the job of the Royal Observer corps.

The work of the command center.

Here is a good analysis of the Battle Of Britain.

Then a video on Sea Lion.

The interesting thing about history is that truth is stranger than fiction. Now could the Colonel’s plan work? let’s see if I can put some pieces together.

Historically the air war in Britain was conducted by Luftflotte 2 which was also responsible for the Battle of France. The battle Of Britain started in earnest in August 1940. The colonel’s plan moves that to late May

The battle Of Britain started in earnest in August 1940. The colonel’s plan is that there would be a plan to conduct a massive airborne assault in late May 1940 with the airborne 7th division securing the gasoline supplies in the Chatham naval base, destroying the Bridge over the Medway and holding until reinforced. The rest of the Division would be securing an airfield, presumably Masden. Then there would be followed up by the 22nd air landing division and other units unspecified. The Colonel mentioned a rather long list including a Panzer Division.

I said that in the first place, that  an air landing would not be possible because the German army had not secured the Calais peninsula before early June. I was wrong. Calais fell before Dunkirk.

In the real world, German airbase in Calais were not operational until early June in any case.

Early June means that the British have two weeks to prepare and twenty six division in Britain.

https://ww2-weapons.com/british-army-in-britain-and-western-europe-1940/
That’s too much of an advantage to overcome. Quite frankly with even conservative estimates of loss calculations, the plan dies, along with the troops on the ground by day six:

The operational losses are based on a 1% loss and two aircraft a day for various reasons The combat losses are a random number with a maximum of 1/4 of the force lost in any single day. I looked at all the numbers I could find and figured a 200 plane reserve and a five plane/day replacement rate would be about right. This chart was one of the best of the charts that the random number generator did. I was a bit surprised how fast the reserve went to zero. By day six, some 400 aircraft have been expended. At best the Colonel’s plan is a Hail Mary shot. The thing is that something like this was Nazi Germany’s only possible way to bring the war to a conclusion that is not a disaster for them.

https://forum.axishistory.com/viewtopic.php?t=78524
The fact is that relations between the US and Germany were not warm.

https://en.wikipedia.org/wiki/Hans_Thomsen
late May was just after Churchill in 1940

But His position was not secure by any means.

https://en.wikipedia.org/wiki/May_1940_War_Cabinet_Crisis
Suppose the Germans discovered the British fun and games during the 1940 Us election.
https://www.pri.org/stories/2017-01-17/how-britain-tried-influence-us-election-1940
With Churchill in place the British are not going to sue for peace and FDR will continue oil sanctions and overall hostility in any case, but if Germany can somehow put boots on the ground maybe they can get the Brits to drop Churchill and his stubbornness and sign a peace treaty. With a peace treaty, the bund and liberty league might put Wilkie in office and get the oil to flow. I realize that this is a pipe dream and Hail Mary play. But for the Nazi’s I think that they were playing long shots in any case.
I’m forward to seeing the Colonel’s book and seeing how he makes it turn out. It should be fun.
Of course Here’s one scene that I will contribute:
A platoon has spent all day, May 28 trying to get it’s act to together. Their mission objective is the Rn station at Dover. This during Operation Dynamo. The station is filled with thousands of tired Tommies, with people going around having them stack rifled and bandoliers, trying to get people on trains and all the rest of the chaos. Some bloke looks up, sees our exhausted paras and says, “Blimey, those are Jerries!”
Here’s a bunch of related links.