Or the realities of life on the beaches of Southwest Asia.

Recently I ran into the story of the North Sea Producer and where the ship ended up, the beach at Chittagong in Bangladesh.

The ship had apparently been moored in Britain for some time as the North Sea Oil fields had become uneconomic and the vessel was no longer needed for oil production. 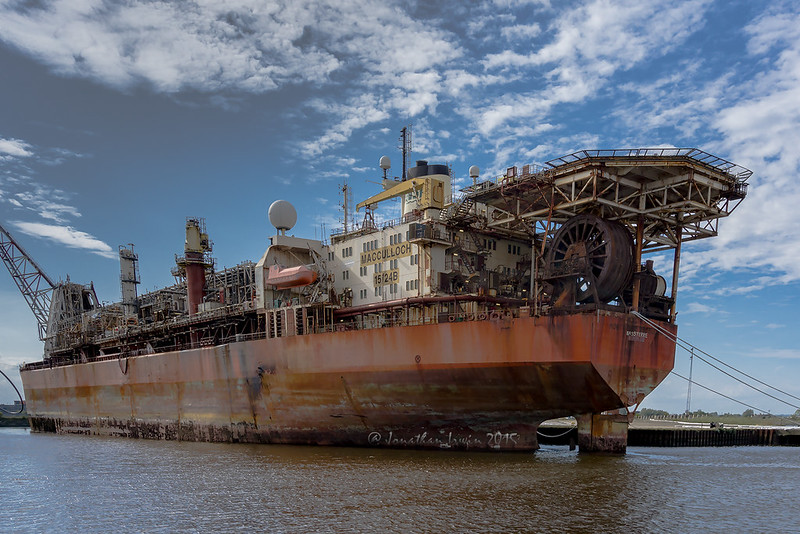 Because of the nature of oil production and the nature of the ship,  an outcry by the usual people was raised over the fact that the ship ended up on the beach.

Of course the former owners of the vessel, Maersk and partners, were shocked, shocked I tell you, that outfit that Maersk sold the vessel to sold it to those nasty people in Bangladesh who didn’t play by the environmental rules that all civilized peoples do.  If you believe that, I have some papers giving you title to a large bridge in Brooklyn.

The fact is that once a ship reaches about 25 years of age it goes from being an asset to a problem.  A steel ship rusts and the metal fatigues, the engines wear out and parts for 25 year old machinery get harder to find and more expensive.   The shipping market changes and older vessels may not fit into the new market picture.

In any case once  a ship has reached the end of it’s useful life it become a rather large problem.  Old ships are actually unsafe as the sinking of the container ship in a hurricane in 2015 proved.

That ship had been kept operating because it was an American built vessel and Union rules in the US require that vessel trading along the coast be American built even though American shipyards no longer exist creating a fleet of aging and ever more dangerous vessels. When any vessel get old things go wrong and seams or welds can fail. So when a ship reaches it’s end of life it needs to be disposed of.

The most common way in recent years is to sell it to a ship broker, for cash, which the debt laden shipping companies  desperately need. The ship broker turns around and sells it wherever they can usually to the guys on the edge of a beach, who get a loan for six months from a bank.

The companies along the beaches  buy the ships at $350 to 400 or so a ton and beach them to cut them up, getting $500 to 600 a ton for the steel. This covers the loan and their costs, mostly labor, leaving them a profit.

Prices of bulkers are hovering at US$350/ldt in India and US$365/ldt in Pakistan, largely unchanged from the previous week.

Dubai-based cash buyer Global Marketing Systems noted, “It has been an entirely underwhelming post-budget period in an Indian market that has witnessed constant falls over the past six months or so, with almost 30 percent being wiped off market prices there.

“Much will rest on the direction of the Chinese exports and whether steel billets will continue to invade subcontinent markets, significantly undercutting inventories already on end-user plots.”

The influx of cheap Chinese steel is competing with demand for scrap steel and ship breakers have been lobbying the Indian government to impose import taxes on Chinese steel.

The bleak outlook on the Indian market following a lacklustre budget worsened this week with local steel prices losing almost US$20/ldt value and the currency depreciating to just over INR63 against the US dollar.

This has deterred ship recyclers from buying ships that are not short in supply.

Container ships, however, continue to be in demand due to the suitable draughts in India. Supply of box ships has also been drying up in Indian yards and the latter is looking to restock on this vessel type.

The business apparently started when a ship ran aground off Chitagong back in the 1960’s. It would not surprise me if the owners of the various breaking yards, the bankers that fund them and brokers that supply them are not all related to each other one way or another.  That would provide at least some stability in a very unstable market.  I’m not sure what entrepreneurial inspiration it took to actually buy and strand ships deliberately. but it was one of the biggest economic opportunities in Bangladesh’s history.  The entire Southwest Asia shipbreaking industry and all the industries that rely on the steel the shipbreaking imports are the result of exploiting the opportunity.

The reason that the beach breakers do so well is that ship breaking is a very volatile market with a bunch of different inputs.  There’s not enough stability to justify the kinds of capital investments that work so well in developed countries.  And ship breaking has always been labor intensive  for that reason. So breaking has always happened where cheap labor is near at hand and there are very few places better than that in Muslim Southwest Asia. So the beaches of steel were almost inevitable. They simply could operate at lower cost and bid higher for the ships than the other potential markets.

Ship breaking is a dangerous business. The possibility of various kinds of accidents is huge as you have complicated frameworks of steel that were not intended to be cut apart. There’s also the problem of what can accumulate in bunkerage and bilge spaces inside the hull. In older ships there is probably and asbestos and possibly a PCB problem as well. Though mix salt water and some of the other materials used for insulation or protection may not be much better.  Then there’s rust and dust everywhere which has it’s own set of problems.  Add open flamed cutting torches and the potential for disaster is obvious.

The economics that supported the shipbreaking on the beaches are complex.  For one thing the price of the ships relies on the price of steel and if the yard owners buy too much they have a huge problem very quickly when ships are in the 70k to 100k ton range. Another issue is the price of structural and billet steel on the market.  If that falls below  the cost at which a ship can be recycled the yard owner  can be in real trouble.

The big problem the steel beaches face right now is that the industrial world may be getting back into the shipbreaking business.  The landbased scrap industry has developed tool like heavy duty shears that can rip through even the heaviest steel plates. These shears are attached to large excavator frames that make one operator incredibly productive.  Also, with the decline of integrated steel mill across the industrialized world, scrap is going to become more valuable.  It may be that soon, scrap may become to valuable to let a ship go to the third world and breaking will be efficient enough to pay.

Ship Breaking has always been a rough, dirty and pretty ugly business. It’s also been a necessary one driven by the simple economic fact that the material in a ship is simply too valuable to just let sink into the deep ocean if it can be avoided.  So ship recycling will continue to be an industry.

What will happen to the steel beaches?  There was some speculation that ship breaking would move to Africa in the constant chase for cheaper labor. But somehow the Africans don’t seem to have the entrepreneurial spark that the Bangladeshi’s had. There have been plenty of ships stranded on African beaches, many as large as the M. D. Alpen, made of a treasure of steel.

Just waiting for somebody with a torch and truck.  Yet there they are, rusting away.  It’s not the cheap labor that made the steel beaches what they are, but the drive of the people who own the yards and the people who go there to work.  It takes vision and energy to see not a rusting hulk but a pile of steel that can used to make other things. That’s kind of vision that creates wealth. In the Third World, all too often that vision is squelched or crushed.  I don’t know what’s wrong in Mauritania that there is no one with a torch and a truck, but until that country finds somebody like that, the country is going nowhere.

Here’s my Steel Beaches board on Pinterest of the scrapping beaches from the days of wooden ships to now.

Using a shear on ship.

Breaking a ship in Hamburg.