The early 1960’s were to some extent a golden age of muscle cars and drag racing. Just about anything and everything was sent down the 1/4 mile in the name of shaving a few more seconds off the time.  While most people went for ever more RPMs, compression ratios and supercharging there were people that went for different approach.  I’ve seen all sort of weird stuff attached to cars from the sixties, much of it pure hokum, so when somebody posted an ad for the Turbonique drag axle  in a Facebook group, I just had to get more of the story.  Was this technical hokum or something that was just plain nuts. 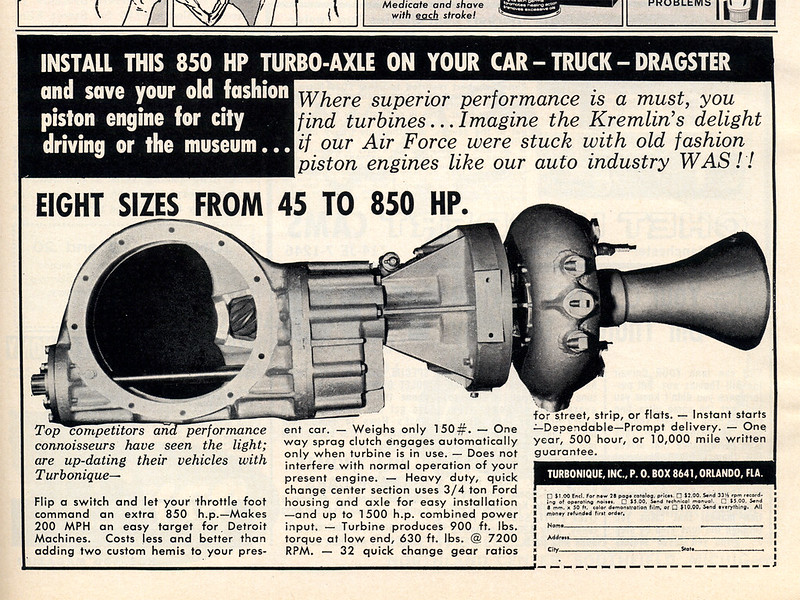 Well the 1960’s were the period where all the  just plain nuts stuff seemed to happen. On the other than hand this could be another 100 MPG carburetor.  Still, I that the pinch penny that the typical technical hokum people go for would want an extra 850 HP, so that left the “nuts” drag racing crowd. So I did on Turbonique and found some links, seen here.

Where It All Began 1967 – Turbonique Drag Axle

Apparently the fun didn’t last very long.  There was a key problem with the products of the Turbonique company.  Once you lit the fuse, that was it.  There was no way to throttle the things once they started so it was either on, or off.  With these things it was press the switch and hold on.  In many ways the intrinsically unsafe go karts were probably the safest of the three products.  Those, at least from the pictures seem to just rely on the thrust of the rocket.  Rockets are actually fairly predictable if well designed.  The Turbonique units seem to be fairly robust for rockets, probably because they did not have to fly.  This page from Iowahawk’s link show a GTO with the thrust units. Go karts are another matter.  150 MPH in a  go Kart is just stupid.

The turbo supercharger is also pretty straight forward and the design looks fairly robust.  And if there were catastrophic failures, well that wasn’t exactly an unknown phenomenon on drag strip.

Which brings us to the drag axles.

Without actually seeing what the turbine rotor looks like, it’s hard to tell just how fast it spins.  At guess it’s about 30,000 rpm.  From the various pics it looks like a lot of engineering into the various gear boxes.  That’s not really a surprise as the step down was 30:1 and the sprag clutch had to be fit in there someplace.  A lot of stuff to go wrong in a place where stuff goes wrong on a regular basis anyway.

The fuel for these things is also just plain nuts

Shock, explosive and flammable do not a good combination make.  Especially in a fuel that is self oxidizing.  This was not something you want in a chemistry set.  Since Turbonique sold the stuff under a trade name, you wonder how they shipped it. In small canisters, I hope.

I think that the rocket go karts were what got the company shut down and the owner locked up for mail fraud.  The superchargers and drag axle represented big money for a hobby. Also, by the very nature of the beast, drag racing requires that you have a high degree of mechanical aptitude.  The go karts were cheap and simple enough to be dangerous. Then there was the fuel handling issues.

In any case, with the shut down of Turbonique the owners were more than likely left without a ready source  of n-propyl nitrate as the stuff is pretty useless for flying rockets due to it’s shock issues.

Turbonique while by and large forgotten outside the dragster community has given us a couple of cultural legacies thank to the Darwin Awards and TV tropes. First is the origin of the JATO Impalla story.  It doesn’t take much to look at a Turbonique rocket and see a JATO, especially if it was painted green, which was a cheap and easily available color available during the cold war years.

The second was the push button “turboboost” TV trope. I’ve always wondered where that came from and why hitting nitrous switch was called a turboboost.  But with a Turbonique pushing the button would give you a turboboost in fact.  All it would take is for some director or writer to think that was cool during a file shoot and we would be stuck with it forever. I’ve always wondered what that exhaust in the center of the 1960’s Batmobile was and now I think I know.  The original Futura doesn’t have it. The Batmobile does.  Did Barris add a Turbonique drag axle to give the car more pickup.  That center exhaust looks familiar now that I’ve seen a Turbonique drag axle and giving the more than likely heavy Futura some pickup was probably mandated to make a Bat super car.

This was a fun look at a more or less lost piece of automotive technology.  I don’t think that anybody will be building rocket propelled turbobosters any more for very good. It’s always good to remember that there was a time when fun didn’t mean safe.