If you like anime and manga, You will want to visit Nakano Broadway if you visit Japan.  I’ve been there all three of my trips to Japan.  Surprisingly, I don’t have that many pics of the inside, but what I have is here. 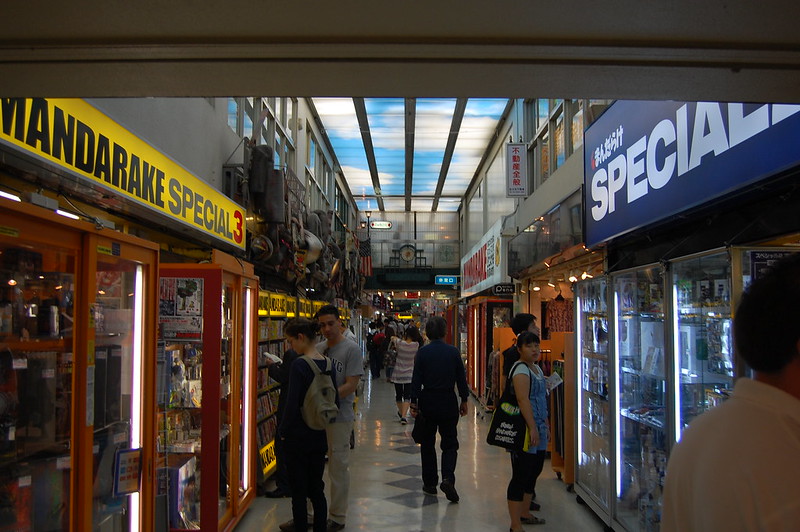 It’s a short walk from the Chuo Line Nakano station.

The mall is known for it’s shops containing anime and manga goods, but there’s actually much more there.  My first trip we go there before Mandarake opened and I walked around the entire mall, finding all sort of little shops selling all sort of Japanese stuff that had nothing to do with hobbies  or anime.  There’s also the long covered shopping district as you walk toward Broadway.

For  some off the wall shopping in Tokyo it’s worth going just a little off the beaten path to get to Nakano Broadway.  It’s also a good stop after visiting the Ghibli museum as both are on the Chuo Line.

Here’s a playlist of walkthrough videos.

The main attraction for most non Japanese is Mandarake the used manga, anime and Otaku goods paradise.  Mandarake isn’t just one big store, it’s a bunch of different small cubes scattered all over the third and fourth floor of Broadway.

Danny Choo does a walkthrough.

Nakano Broadway is one of those places that are always worth taking time for.  It’s also easy to get to and worth the trip if you are in Tokyo. Highly recommended, for what that’s worth.

I found these pieces on Anime News Network. One might believe that the anime business is full of money like Hollywood, making big deals.  That’s never been the case.  The margins for animation are thin because the cost of creating animation is so high and typically a show cannot survive on it’s own, a least with TV revenue.  This is especially true since even the best shows are run late at night.  With streaming, that means that shows that run on Cruchyroll may get seen by viewers in this country before fans in Japan can get up and play back their recordings.

So the anime producers rely on sponsorship from toy companies and other companies  that are hoping that the anime becomes yet another Naruto or One Piece. Of course most anime last at best on cour or season.  So having an international audience that likes a show as it’s being produced is a big deal. Heretofore, we in the West had to wait years before we saw a show and there was a limited selection. Now the entire slate is available through Crunchyroll or Funimation.  How that’s going to change things remains to be seen, but it compresses the market and can do nothing but increase anime sales and revenues. which is nothing but a good thing.

or a long time now I’ve admired the art created by Japanese Otaku artists in garage kits and anime figures. I’ve posted before about some life size figures, but not about the small scale community which is quite large and vibrant.

END_OF_DOCUMENT_TOKEN_TO_BE_REPLACED

Ghibli is making another movie. This is great. Ghibli doesn’t make bad movies.

A vampire? and her maid explore San Francisco.

This is just wonderful.

I hope this get translated. Looks like a great book.

Actually, I loved Emma, though the manga is better than the anime. Yes Emma is passive, the story is charming and there is a great attention to detail vis a vis Edwardian London.

Perhaps the thing I liked best about it was that  it went outside the tropes and boundaries of anime and attempted to break new ground.  Comparing to titles such as “Pride and Prejudice” doesn’t really make sense.  I would expect the BBC to do a Estate romance well. After all that’s their culture.  For a Japanese to do one that works is an achievement.  It’s obvious that the creators loved the material.

(Note: This anime is unrelated to Jane Austen’s Emma.)

While visiting his former governess, William Jones abruptly meets her maid, Emma, for she opens the door into his face. He is enamoured with her despite the difference in wealth and class, he a gentleman, she a maid. However, his father applies pressure for William to marry a lady, but he rejects them all. Then enters Eleanor, who seems to have a chance. A romance between two people from vastly different walks of life – I love these types of romances. Opposing circumstances bring great…

The classic Studio Ghibli short that most people don’t know about.

Ok, they do the same sort of thing at NY Comic Con. Still it says something as how big Comiket is that the con clears Central TOKYO!! of taxis. IN case anybody’s wondering why, Comiket is at the Big Site Convention Center which is on the far East Side of the city on the East end of the island of Odaiba and the public transit isn’t really that convenient if you are in a hurry.