Starting it’s career about the same time as the Normandie, Cunard’s entry into the super liner competition had a much longer more illustrious career before ending up as a museum/hotel in Long Beach CA.  That, in spite of a rather rocky construction and some thinking  for a time that the ship would   end up being scrapped in the slip before  ever touching the water.

As events turned out, that would have been a great mistake as the Depression 1930’s became the war 1940’s, but there was no way to know that in 1931.  I’m starting this post with some scanned pages from a facsimile of special issue of  The Shipbuilder and Marine Engine-Builder timed with the Queen Mary’s maiden voyage.

The magazine filled with ads from the people who made the various supplies and equipment for the Queen Mary.

The Queen Mary at her trials.

Some interior views.  Compare the carpet with the pictures from Long Beach below.

In the beginning of 1930’s the Cunard line realized that they needed to replace the ships in the Atlantic ferry service. The problem was that in the Depression business for Cunard was down and money was short.  The construction for the first of these new ships, which at the time would be the largest liner ever built was first started in December 1930. Unfortunately the Depression caught up with hull 534 and construction stopped.

The steamship with yard number 534 was laid down in John Brown’s yard in December 1930. Good progress was made with the construction of the hull but the project fell victim to the depression that followed the Wall Street crash. Work was suspended late in 1931 as the Cunard Company could not raise the capital to complete the ship. The partially completed hull lay rusting in the Clydebank yard for three years before the Government intervened to provide a loan to Cunard to finish the ship. Part of the loan package was that Cunard would also take over the ailing White-Star Company, forming Cunard-White Star. Financing was also included for a second, subsequent steamship of dimensions similar to 534.

The rusting hulk of 534 on the Clyde that according to local M.P. David Kirkwood shouted “failure! failure! to the whole of Britain.”

Work restarted at the end of May, 1934. The ship was over 1000 ft in length and 80,000 tons gross and was powered by four quadruple expansion, reduced geared turbines that developed 50,000 horsepower.

Getting hull 534 ready for the launch.

The ship’s name was kept a well-kept secret until her launch by Her Majesty, Queen Mary on a dreich, wet and windy Wednesday 26th September, 1934.

White Star was also having it’s rather severe problems, with poor management and fraud issues forcing the cancelation of it’s new ship the Oceanic. And also causing the demise of the line.

So as the 1930’s and the Great Depression rolled on, the two major shipping lines in Britain were facing an ugly future.

Here is the hull in the stocks with construction stopped.

The only thing that could be done was to merge and ask for a government subsidy. which the newly created Cunard White Star Line got.

After the merger and the very large loan from the government the new Cunard White star Line could complete the new supership and build  a sister. Some Queen Mary links.

The ship would be famous even before she was launched.

A film of the launch.

The ship would have a fairly uneventful 19030’s until late 1939 and the beginning of yet another war. Here’s the Normandie and the Queen Mary in her war paint

To be joined shortly by the brand new Queen Elizabeth. This would be the only time the three superships would be in NY together as the two Queens would be pressed into their valuable war service, transporting thousands of troops to war fronts around the globe while the Normandie, as I posted earlier would never leave NYC.

The war years were not completely uneventful for the Queen Mary.  the Queens great speed, 20 knots greater than a Uboat on the surface, let alone submerged was their great protection.  But that could be hard on the escorts who may be with her and perhaps got a little too close a 80,000 ship that could not, under orders, slow down and risk a division or so of troops sailing aboard. In fact the Queen Mary sank her escort once, splitting the light cruiser Curacao in half like a giant knife.

The Damage to the Queen Mary was relatively  minor and quickly repaired, with the ship being returned to service for the duration of the war.  The queens’ last duty was transporting war brides back to the states following which, the ships went into refit for returning to transatlantic ferry service.

The two decades following the end of the war were more or less good years for the Queens. they were nor entirely uneventful as the Queen Mary ran aground at least once. These were the kinds of things that  a ship in service could deal with.

My grandfather caught the Queen Mary as she departed NY one day.  Here’s a Flikr album of the slides he took that day. 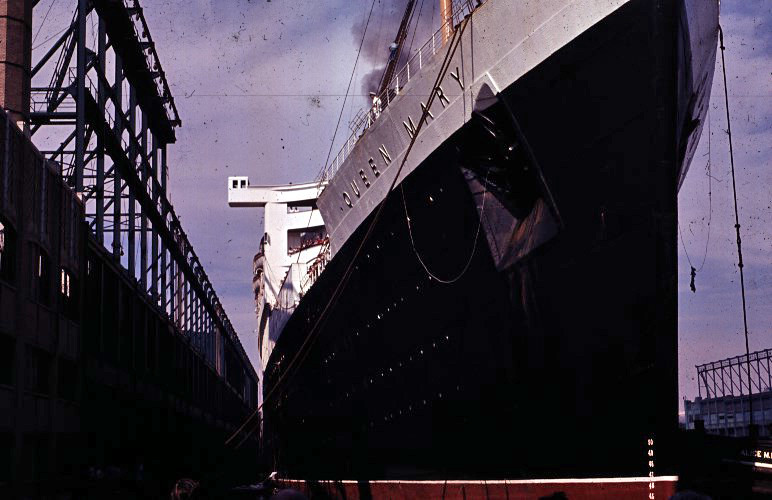 What the big ships could not deal with was the passenger loss due to the completion with the airlines and the new Boeing 707.  The jets reduced the flight time to about the same time that it is now, about seven hours and the ships could not afford the loss of the business customers who were not willing to wait five days to conduct business.  In the late 1960’s, with a major refit and overhaul looming the decision was made to retire the two Queens.  I actually saw the Queen Elizabeth’s last NY departure as a child on a trip to the Statue of Liberty.    The Queen Elizabeth was purchased by a Chinese business man and ended up in Hong Kong, where she burned and sank under mysterious circumstances.  The Queen Mary, on the other hand went to Long Beach to become a hotel and museum, where she resides today.  Here is a link to a flikr album of exterior and interior pictures. 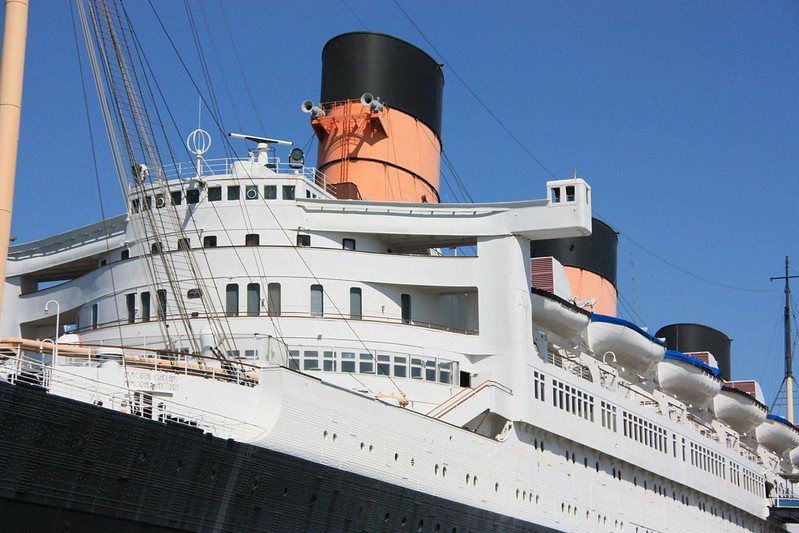 This is the third of these ships of the interwar period posts.  The first two being the SS America  and the Normandie. If I get information about more ships I will do more. For now, though, this is it.