In the 1930’s the French Line felt the need to augment the SS Paris   and the SS Ile De France, the Line’s premier ships on the transatlantic ferry route. The line would commission the largest and perhaps the most beautiful ship that the nation of France would build up to the 1930’s. That ship would be Normandie.

The Compagnie Générale Transatlantique was started in the 1850’s with the support of the French government to address France’s lack of a merchant marine. Entering into the 20th Century the line would attempt get itself into the transatlantic ferry business with a series of ships of increasing size and tonnage. The French Line’s selling point was service in the true French style and the line provided that with true French panache in it’s growing fleet of ships on the transatlantic route starting with the France in 1912, the larger Paris in 1918 and the Ile De France in 1927.
https://en.wikipedia.org/wiki/SS_France_(1910)
https://en.wikipedia.org/wiki/SS_Paris_(1916)

The Ile De France actually had a fascinating career before being a star in a low budget thriller just before being scrapped. Right from the start the ship had an exciting time just getting out of St Nazaire for trials, due to the typical confusion caused by hurrying to depart from the confined port at high tide.  The ship went on to glory as TRANSAT’s  premier liner.  The ship was known for it’s style and service. This made the ship a favorite with wealthy first class passengers.  The ship was also responsible for the first transatlantic air mail delivery from a plane launched from her deck.  The Ile’ De France had a long and glorious career.    She also outlasted her successor by thirteen years, being scrapped in 1959.

Still it’s the grand ship that came in 1935, that’s the story here.  After the success of the Ile De France the  decided to build an even larger and much more spectacular vessel. That vessel Would be the Normandie.  The Normandie was an exercise in French optimism.  A grand one.  Like her predecessors she would be built at Pennhoet shipbuilding at St Nazaire. The ship would be the largest vessel so far for the French line.

The Normandie’s hull was designed by naval architect Vladimir Yurkevich.  Yurkevich had been responsible for the design of a class of Russian navy submarines and started the design of a class of battleships that would never be built due to WW1.  Being on the White side of the Russian revolution he was forced into exile and ended up working for Pennhoet, where his design for the hull of Normandie far outperformed the other models in tank testing.

The hull was not the only interesting technical choice.  The ship also had turbo electric propulsion.  Indeed The Normandie, at 160,000 hp, probably was the largest turbo electric system ever installed in a ship.

The ship would be the largest ship in the world when she was launched in 1932. Here are some pictures of the ship under construction

http://saint-nazaire.hautetfort.com/tag/francois+kollar
Here’s a video of the ship’s launch.

The ship was primarily funded by the French government and required 65 million dollars for her construction. The ship was commissioned   Money that the ship could not pay back in the midst of the great depression. Here is the ship at her fitting out pier.

You can’t really talk about the Normandie without using superlatives. Certainly the ship’s exterior was superlative.

The interiors of the Normandie are what set the ship apart. The ship’s great spaces were lavishly decorated in the latest art deco style by premier design houses such as Lalique. Here’s some pics.

It’s actually worse than the numbers show because on the Normandie some 75% of the spaces were reserved for first class, such as the grand dining hall and occupied by non revenue and lightly used spaces catering to the expectations of first class passengers. Meanwhile the Second class and tourist spaces were rather cramped.
The problem was that as the depression went on Americans travelling to Europe were not as willing to pony up for the first class fare as they had been in the 1920’s. After the ship’s maiden voyage, it was evident that there vibration issues. In the quest to resolve those issues, TRANSAT also added more tourist cabins and a new tourist café on the aft promenade.
Here’s a bunch of Normandie related links.

The Normandie would enjoy 139 westward crossings as the 1930’s progressed. by and large this was an uneventful time for the ship even as the war clouds grew. Those war clouds caught the ship in New York as war started in 1939. For the next two years, Normandie stayed a pier 88 with an uncertain future hanging over her head. That changed in December 1941 when the US entered the war and Promptly seized what should have been an important war asset. There was some talk of converting the Normandie into an aircraft carrier, but the logical choice was to convert the ship to transport service like the two queens and work commenced in early 1942.

What happened next is a perfect example of the damage that carelesses and stupidity can do in high pressure work situations. The grand salon was an obvious place to store life preservers while they were being distributed to the cabins. There was also work being done to remove the lighting stanchions in the grand salon, with torches. As the last stanchion was being cut the sparks fell onto the kapok life preservers which promptly caught fire. What happened next was a comedy of mistakes and miscommunication that probably did more damage to the war effort than just about anything else in 1942. Smoke entered the engine room and the staff cut the power including the power to the fire pumps, and the watertight doors. There were no fire extinguishers handy so there was no way for anybody to stop the fire. When the fire department showed up, jsut about everything in the department, they started to pour water willy nilly in the fire. Which made the ship top heavy. Vladimir Yurkevich was living in NYC and showed up to offer to take a crew down to open the sea cocks. The navy refused, which was probably the right call, but that meant that the inevitable was going to happen. The 80,000 odd ton ship rolled over at her pier.

This newsreel pretty much shows what happened when the ship rolled over.

Cruise Ship History: The French Line’s SS NORMANDIE. The greatest liner ever to sail “across the pond”! Will the SS United States and QE 2 face a similar demise?

The Story of a Ship That Sank Because of Lifejackets

http://images.google.com/hosted/life/cb6cf66fa219f5c1.html
So now the salvage started. All through 1942, first the superstructure was removed as well as the propellers and other external parts. Then the ship was slowly pumped out until the hull righted in August 1943. After the ship was righted the hulk was taken to the Brooklyn navy yard for examination and to figure out what to do with it. It turned out that that was nothing. At that point, even replacing the superstructure with some sort of temporary superstructure would take longer than could be justified and take effort that was needed for the repair of actual warships. So the hulk became a roundtuit until the war ended. With the war over, the cost of restoring the ship was unreasonable, the French apparently did not want it and took a check instead so the hulk was put up for auction. The hulk was purchased for scrap by the Lipsett company and made one last voyage across NY harbor to it’s last stop in New Jersey. The end of an all too brief career. 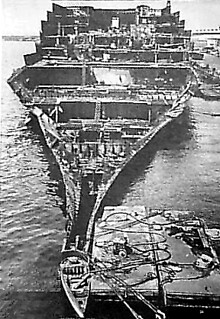 The naval archives has an excellent page of Normandie pictures.

There are no model kits of the Normandie. I did find this RC model YouTube video.

The Normandie was in many ways a half step with the world she was created in. The ship was an extravance in world where extravagances would be something that the world had trouble affording anymore. Still the ship was a brilliant bright thing in what would be a dark time.