Just remember that a gun free zone only means that if you obey the law, you are defenseless. The bad guys already know that they are breaking the law, so why do they care about guns, except those that might be shooting at them. so the crazies pick targets labeled gun free, or nobody’s going to shoot back at me zones. Seriously, do you think a an Islamic terrorist is going to go all jihadist in a motorcycle club?

It’s happened again. A nut went to a gun-free zone and engaged in a mass killing. 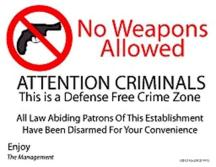 In this example, the perpetrator apparently was an Islamic fanatic upset about gay people.

But let’s set aside the question of motive and ask the important question of why politicians and bureaucrats don’t want innocent people to have any ability to defend themselves (they’ve even adopted policies prohibiting members of the military from being armed!).

The invaluable Crime Prevention Research Center has already weighed in on the issue.

Since at least 1950, only slightly over 1 percent of mass public shootings have occurred where general citizens have been able to defend themselves. Police are extremely important in stopping crime, but even if they had been present at the time of the nightclub shooting, they may have had a very difficult time stopping the attack. Attackers will generally shoot first at any uniformed guards…