A while back I created a post about the American tank design and development strategy.

Having looked at the winning side, I thought that I would look at the losing side and show why, in the end the Germans strategy comes down to “how to do it  the wrong way.”

Germany’s design strategy was rather different from the evolutionary development strategy pursued by it’s enemies.  The Wermacht started the war with tanks that, while small were adequate for the jobs they called upon to do.

After all they won the battles of Poland, France and most of Russia.  The Panzer IIs, IIIs, and IVs performed well  performed superbly in the role that a tank is supposed to be used in, that of a shock force to penetrate and disrupt the enemies forces.  The early German tanks were the product of a leadership of officers such as Gudarian who understood that the tank’s role is offensive, not defensive and that mobility is the tank’s greatest strength.

Unfortunately for the Wehrmacht, two things worked against them. 1. Hitler and other high general officers were overly impressed with the armor protection of the Btitish Matilda II and scared silly by the T34.  2. the German fabrication techniques did not lend themselves to scaling up of production.

The German tank plants were fairly small and not well laid out. The Germans seemed to prefer a cell rather than a line layout as seen in these videos of the Rhienmetal plant show.

Hitler especially  with the armor protection of the Matilda and mandated that Germany pursue heavy tanks that were protected from their own guns. Which lead to ever larger vehicles as the guns and armor race went on in 1941 and 1942.  But that was exactly the wrong way to go for Germany.

What Germany needed was numbers of tanks, not big massive ones that ate up their logistics.  Germany needed number to counter the ever increasing numbers of American  Shermans coming off assembly lines and perhaps more importantly the numbers that were produced on Soviet assembly lines transferred from the US as tools and built in Siberia.  Considering that German production didn’t take the war seriously until late 1942, you have to wonder what they were thinking. I’m guessing that  this was another of those case where the German emphasis on operations spread to intelligence.

In any case, the German design philosophy took a left turn in 1941 and 1942 in the wrong direction.  Instead of upgrading the panzer IV with a sloped glacis and better turret armor, the Germans designed two completely new and massive vehicles, the Tiger and the Panther.

The tiger 1 was a massive machine.  It needed to be, because the logic behind it was that the armor could stop anything an enemy could throw at it. And it had that 88mm gun.  The problem is that from a fabrication, logistical and operational aspect the Tiger was a nightmare.  The tank had  elaborate production fixtures and required that the hull be moved all over the production floor assembly.  When it left the factory, the tank had to be moved on special 60 ton flatcars and be transported using a smaller set of tracks and the outer road wheels removed to ensure rail clearances( I have seen pictures of Tigers on flatcars with wide tracks, but how far the tanks were transported is unknown.) Add to that the fact that the transmission and engine on the Tiger were over stressed and the vehicle could not travel very far without breaking down and there’s a reason why so many pictures of Tigers are on the side of the road, dead.

There was also the problem that the Tiger was expensive, far more so than was necessary. This was driven by the fact that Tiger production was don by Henschnel, who had been a locomotive manufacturer before the war and whose plant was poorly laid out for increasing production. This meant   that the tank was very expensive both from a cost and a  man hour  standpoint.   Which combined with Henschnel’s small plant meant that  production numbers were low, too low to win.

A great site  about the Tiger tank. 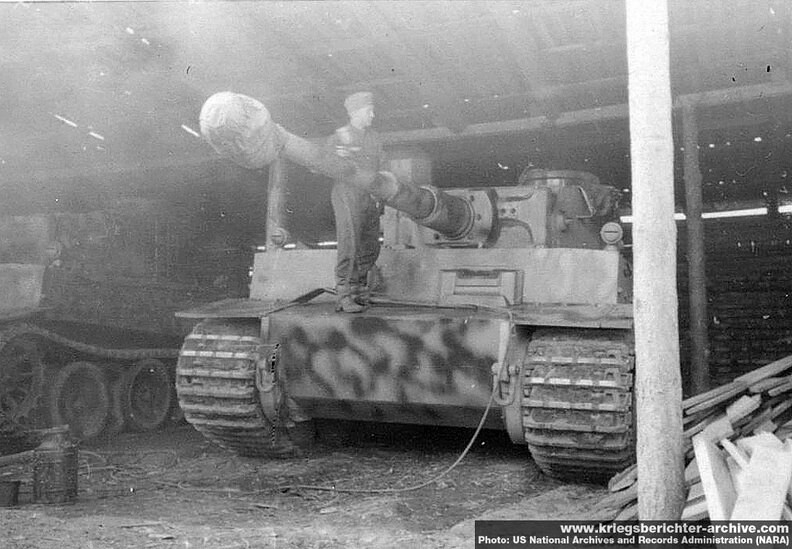 The other of the new German designs was the Panther.  Overall the Panther was a much smarter design than the Tiger.  It’s excellently sloped armor and excellent gun made the tank a winner, on paper.  The problems started when the tank was actually operated. The tank was rushed  into service full of bugs, some fairly serious and one that was lethal both for the tank and, in the end, Germany. The fairly serious issues were armor shell traps underneath the side skirts and frontal turret armor that guided shell right into weak points. those were corrected by welding plates in the areas.  The lethal issue, that was never corrected, was that the mean time between failure for a Panther gearbox was 150 km. This was compounded by the fact that in order to reach the final drive the entire tank had to be disassembled like the Panzer iii in the video above is being assembled. Which meant that the tank had to be withdrawn to a depot for repair.

Ultimately what led to the defeat of Germany and the Nazi government was their own arrogance.  Quite simply, they never seemed to do their homework.  There seemed to be no general gathering of intelligence outside Europe, no long term planning or intelligence gathering in the Soviet Union.  Because of their nationalist sentiments the Nazi’s didn’t seem to keep the network of embassies and spies the Soviets did. What spies they did use seemingly focused themselves on operational concerns.  Then there was the problem of cronyism and intermural fighting between the Nazi bigwigs.  As well as the stupidity of cutting BACK war production in 1940 after the end of the battle of France.  And not fully exploiting the labor force by allowing women to work.  Along with mass murdering 10 million or so “undesirables.”  All those things are led ultimately to the defeat. The Tiger and Panther are just another part of the puzzle that was the rise and well deserved fall of the Third Reich.