I’ve been a railfan and model railroader for most of my life.  I’ve been reading the railroad magazines almost constantly since I was seven years old or so if the magazines I was tossing recently were correct.  My focus was on my local railroad, the New Haven, which was merged into nonexistence in 1969 and other local to NYC railroads with some interests in American railroads in general.  I knew about things like the Shinkansen, but in a very abstract way.  I put the Shinkansen on my bucket list and left it there.

Meanwhile my interest in Japanese anime grew from realizing that most of the cartoons that I really liked as a kid came from Japan and discovering Miyazaki through bad video tapes shown at science fiction conventions. With this my interest in Japan in general increased and I started to think about going on a trip. In 2001 the movie Spirited Away was released and I fell in love with the train in the movie.

So of course I wanted to find out if something like that really existed. Therein begins my journey into the wonderful world of Japanese railroading. So for the last fourteen years or so I’ve been scratching through websites, google searches and books, looking for a railcar, that it turns out, was only a creation of the animators at Ghibli and Hayoa Miyazaki’s fertile animation.

Along the way I found a bunch of websites and organizations. Some in English:

Including a page on my favorite line the Tsurumi Line.

Including a rather fast trip around the Yamanote loop.

I went to Japan. 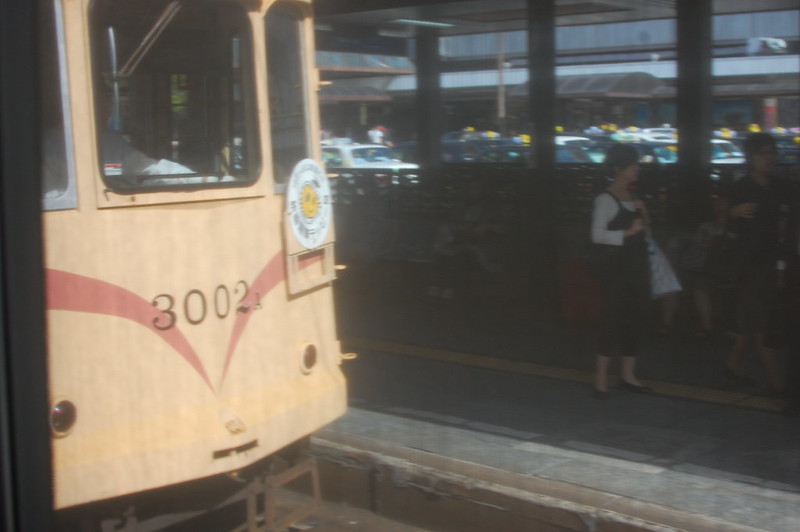 Watched a ton of videos over the years. Here’s some videos and Youtube channels.

The Tokaido and Sanyo Shinkansen end to end.

Found and read some great books, many of which are out of print, unfortunately

When I started out looking for the railcar that did not exist I never imagined what the real Japan railway system was like.  On my first trip there, we arrived late at night and took the train through the dark from Kansai airport to Kyoto.  With train lights on, it’s hard to get and impression about what’s going on.  In the morning I found out that railroad wise, I was in an entire new world. Of course there were certain things that I knew about, for instance the crowding and the Shinkansen. So much was a diary that need to be filled.

What I didn’t know about was the Japanese relationship with the railroads and why. I’ve grown up in an area where commuter rail is part of life, yet when the commuter trains were in the act of being replaced there was no great ceremony for the new M8’s and there will probably be no formal last ride for the M2’s that are going away. Mostly because, here in the US, most people don’t care.

I’ve posted about the story of the Shinkansen and how it related to my favorite railroad, the New Haven.  The Shinkansen isn’t something that can be written about, It needs to be experienced to understand what passenger train perfection is.

Actually all of Japanese railroading needs to be experienced because I don’t think that you can really understand Japan without some experience with the trains.  For instance you can’t know Tokyo without understanding the Yamanote loop and how it binds the city together.

Or understand the crowding until you ride one of those cars crammed to the gills.

The Japanese have a relationship with their trains that just doesn’t exist here in the US.  Maybe that’s because the trains still run or maybe it’s because more people ride them, but trains are a much bigger part of life in Japan than they are in the US. And the railroads take advantage of that attachment with special paint schemes.

All of which show how deep the relationship goes. Japan loves it’s trains even  when they are going away.

Take it from me, none of the conductors in all of the commuter rail in the NYC would do something like this.  Of course the trains in the NYC area go to the scraper after being retired because they are worn out.

The idea of a rail vacation here in  the US is something mostly relegated to the past, unless you are a train nut, not so in Japan.

Japanese train otakuism has some strange fetsihes, for instance finding the shortest ride you can take on the Shinkansen and telling others about it.

How many people here in the US would vie to ride an inspection train.  OK, it’s Dr. Yellow on the Shinkansen, but still.

I started out trying to find a train that was out of the imagination of the most talented animation director of all time and discovered something else instead.  I discovered a rail system that moves over 2 billion passengers a year.

To do that creates a density and number of trains that is hard to understand unless you see it for yourself. Here in US, on the busiest commuter lines you can wait an hour and see maybe 5 trains in midday.  Typically in Japan you can sit for 15 minutes and catch 10 or more.

As important as the density of trains is to Japanese life the relationship that the rail companies have with the culture is perhaps more important. Here in the US it seems to  large extant as it the railroads want to become invisible, even the commuter railroads. That doesn’t happen so much in Japan.  By and large, the rail companies want to be part of the culture of Japan and part of the fabric of the country.

That’s been my journey through the rail culture of Japan.  I never found the train from “Spirited Away,” but I’ve found so much more than an animated train. I’ve discovered a rail culture, that while alien in many ways to the one that I grew up with, is vibrant and alive in ways that the rail culture I know here in the US is not.  Unlike the attitude here in the US where it seems as if you are fighting a rear guard action and living in the past if you like trains, even by the railroads themselves, in Japan rail is seen as a part of the fabric of life and more importantly, as part of the future.  That’s the most important thing that I’ve learned on my journey.

Top picture from “Spirited Away,” available on Blue Ray.