The 1930’s SF Comedy “Just Imagine.” While this is a comedy, this retro future has some disturbing elements.  Considering when the movie was made and what it shows this is what the Progressives wanted as their ideal end game.

Apparently the model used in the movie was designed around the 1929 regional plan for the City Of New York with some touches from the granddaddy of urban utopia film, Metropolis, a film that still has great impact, but that people never seem to learn the most important lesson from, which is, don’t do this.

In amongst the Art Deco and Flash Gordon look(literally, many of the effects and props were used by Flash Gordon and other serials) is a society that, is pretty fascistic. Considering that the movie was made in 1930, when the ideas of fascism were running through the intellectual set like wildfire and at that time none of those ideas had actually been put into practice and the horrible downsides of them made evident that’s not that big a surprise.

In amongst the El Brendel antics and 1930 comedy there’s a truly nasty society.  The people living in it have given up the most fundamental things that make life livable.  They no longer get to make the people who they marry, the jobs that they will do or even eat real food.  For that matter their children are longer their own.

I can’t think of anything more unbearable than living in this kind of society.  Yet for over a century now, what Just Imagine  shows has been what the Progressives consider the best endgame.  Whatever flavor you want to call it, whether it’s Fascism, Progressivism, Nazism, Communism, or whatever they are calling the unnatural and oppressive tyranny the Progressives love so much this week.

One central theme of the Progressive ethos is the desire to, as harshly as necessary, blow away all the culture and way of life that existed before, just sweep it away en masse and replace it with what they think that life should be like with no concern for the communities that may already exist.

The sweeping away and overbearing attitudes of the of the typical Progressive carried over to their architectural visions.  You can see that all over New York and it’s monumental project created by the likes of the Rockefellers.

A classic case of how the  Progressive vision carried over to reality is the replacement of the Gashouse District with Peter Cooper Village and Stuyvesant Town.  Looking from down in high, from the met Life building, where the CEO was looking for a place to invest his money replacing “slums” with new housing, especially in wartime pressed housing NY might have seemed to be something that Met Life could do to contribute to the city.

So, with the cooperation of Progressively minded city officials and some rather overbearing use of Eminent domain, Met Life wiped the Gaslight District clean and replaced it with what their progressive vision of what a community should be, IE large apartment buildings in the middle of parkland courtesy of the vision of French architect, Le Courbisier.

If Just Imagine  represents the airy vision, Stuyvesant Town represent the hard ugly reality.  And ugly it is.  There’s not redeeming feature to brick blocks with windows in them.  They just look as if they were planted there.  And there isn’t much happening there either.  the building’s only possible function is to serve as a bedroom with a kitchen.

The planners always seem to forget that a community requires an economy.  So the first thing they do is build blocks of whatever, housing, industry, commercial, or office in huge blocs and plunk these new developments down and expect them work.  While these great towers look impressive, economically they tend to be monolithic and fragile.  Unlike the communities they replace, with their diversity of economic activities, the towers are all one thing or another.  Which means that you are stuck with a great lot of offices and apartments, concentrated retail space and your light industry, who the hell knows where.  Which actually places a great burden on the urban poor who occupy most of those apartment blocs that the city put up in the 1950’s and 1960’s

No thought seems to be given to the fact, for instance that retail should be along the main streets for the most business and homeowners, for good reasons, don’t like living on busy streets. Add to that that the “cellular city” doesn’t seem to have any employment beyond retail and is designed to make commutes hell and communication difficult. You can see this thinking throughout the 1929 plan.

Like Just Imagine there have been a slew of urban utopia movies over the years.  Most have not ended very well for the protagonists, at least those that weren’t comedies.

From the granddaddy of these urban utopia films, Metropolis, and the other urban utopia films all seem to reflect that fundamental breakdown issue that happens when everything is in huge monolithic blocks and all decisions are made by the enlightened at the top.

If Things To Come seems to have a Fascistic edge to it, well HG Wells was one of the screenplay writers and a Fascist.  I think, though, that Things To Come and the rest of the raft of movies have to be taken as a warning. None of the cities in those movies could actually work.  The dynamics are wrong and their economies would go from plan failure to plan failure with an ever greater spiral of crises.

On the other hand, the Progressive will tell you that without their grand plans and programs, total anarchy and chaos would prevail.  But is that true? Let’s look at the antithesis of the 1929 grand plan, the infamous Kowloon Walled City.  Now Kowloon Walled City lacked everything that the grand planners wanted to bring to city dwellers.  Yet the people living there, by and large seem to have been happy and wanted to live there, something that can’t be said for all too many of the projects of the planners.  They did have one thing that all of the Progressives seem to want to deny everybody.  The right to live their lives as they wanted.  The people of Kowloon had Liberty and perhaps that’s the most important thing they could have.
http://www.dailymail.co.uk/news/article-2139914/A-rare-insight-Kowloon-Walled-City.html

The Progressives always seem to want to pursue their Tomorrowlands with the smart people in charge regardless of how many times that approach fails just about everybody.  New York has been under the influence of one group of Progressively thinking people or another for a Century now.  Yet you can’t say that any of that represents a good thing for the people of New York.  In many ways New York has survived in spite of the Progressives, not because of him.  David Rockefeller will be remembered as a great philanthropist and benefactor of the city, yet due to his activities the city has lost a great deal of it’s economic diversity, thousands of small businessmen were put out of business and the city has suffered for that.

The problem with imaginary cities is that they only work in imaginary worlds. Real cities require the ability to be flexible and antifragile if they are going to work.  That means that as much decision making as possible needs to be as dispersed as possible.
The thing that made New York great wasn’t it’s great financiers.  What made NY great was the thousands of diverse small businesses and the people who created them.  That’s where NYC’s drive, energy, innovation and creativity come from.  Yet it is those very things that the Progressives have been fighting against at great cost to the city.  It seems that they have their head so far in the clouds that they can’t see the facts on the ground.

Anyway, here’s an album of the modern buildings of NYC. 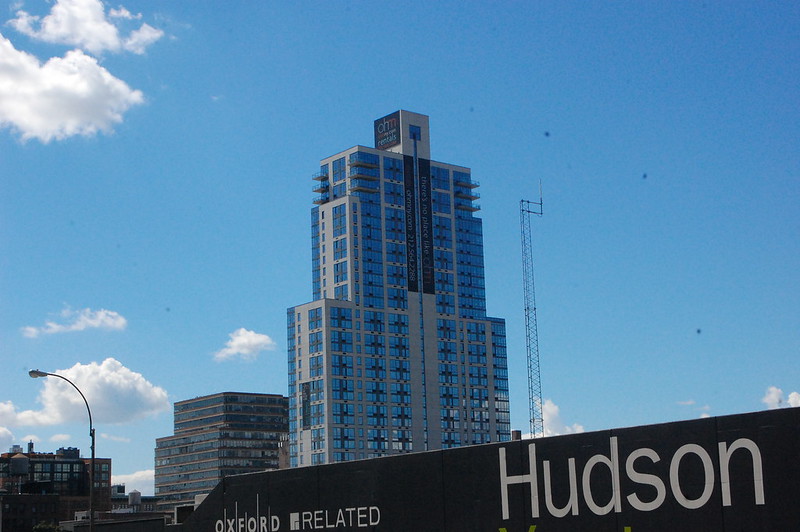 The films about those urban utopias should be regard as warnings that pride goeth before a fall.  There is almost nothing more pridefull than grand plans that do not consider the needs of the people affected by them. Yet somehow the people in charge always refuse to stop presenting yet more grand plans.